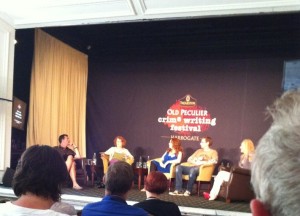 Social Media: Who Are You? panel

This was my first time at the Theakstons Old Peculier Crime Writing Festival, Harrogate, and to say I was excited doesn’t cover the half of it. I arrived on Thursday evening and had already spotted half a dozen crime writers chilling outside on the lawn before I parked the car.

Anyway, the evening kicked off with the Theakstons Old Peculier Crime Novel of the Year Award presentation, won this year by Denise Mina (who also won the accolade in 2012) for her wonderful novel Gods and Beasts. After the awards ceremony had finished the Festival Opening Party got everyone into the party mood, which continued well into the early hours back in the bar.

I woke on Friday to glorious sunshine and a (mild) hangover. The first panel I attended was ‘Dead In Deutschland’. Barry Forshaw expertly chaired the session with Jan Costin Wagner, Sebastian Fitzek, Nele Neuhaus, and Dane Jussi Adler-Olsen talking about German crime novels or ‘Krimis’. After that, as I felt like I was melting in the heat, I headed outside to the lawn (and the shade of the trees) to cool down before the ‘Social Media: Who are You?’ panel. Mark Billingham chaired with Ruth Dudley-Edwards, Erin Kelly, Steve Mosby and Sarah Pinborough discussing the merits and pitfalls of authors using social media. This was by far the most fabulously sweary and high-spirited session that I attended. I admired the panel’s honesty about the good (and the bad) that they’d experienced through interactions online, and their ability to keep their cool when a member of the audience started firing questions at them. In essence, the panel concluded that social media can be a good thing – letting readers and writers connect in a way that wasn’t possible ten years ago – just so long as it’s used in a respectful and decent way. I immediately wanted to follow each of the panellists on Twitter, and so I did! 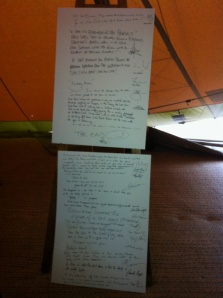 After more time chatting on the lawn, I attended the Random House – Dead Good Books party in the fabulous PapaKata Tent. Here I broke my promise to myself of not drinking, and started on the wine. It was great to meet up with lots of fantastic writers and bloggers and I even had my photo taken in the ‘crime scene’ area of the tent – lying ‘dead’ on the carpet with a blood stain by my head! A highlight of the event was a story being written ‘live’ by the Random House authors – with Lee Child starting it off with the first couple of sentences (see photo).

After the party I had meant to head out into Harrogate for dinner, however the bar proved too much of a distraction and I found myself chatting with a bunch of fabulous people until the early hours. I’ll say one thing about crime writers – they certainly know how to party!

The festival was halfway through, and as I went to bed that night I resolved that on Saturday I would attend more panels …

6 thoughts on “Notes from Harrogate: Part 1”