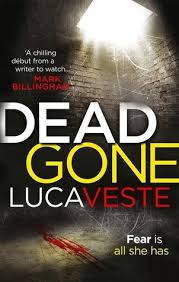 So, to the questions …

Your debut novel DEAD GONE is out this month. Can you tell us a bit about it?

It would be my pleasure! Dead Gone is a part psychological thriller, part police procedural book, which follows the detective pairing of David Murphy and Laura Rossi as they attempt to stop a serial killer in Liverpool. This killer is using his victims to replicate infamous unethical psychological experiments, taunting the public by leaving a message with each body.

It’s also about life, grief, and death…and how we deal with all three.

What books and authors have inspired you as a reader and writer?

Stephen King, Enid Blyton and Brian Jacques (three names you don’t see put together often!) were a staple of my childhood/teenage reading. As a writer, I’m inspired by the characterisation in Mark Billingham’s books, the bravery of Helen FitzGerald, and the atmosphere created within Steve Mosby’s work. The 50/50 Killer by Steve Mosby was a major influence when I started writing Dead Gone.

Can you tell us a little about your writing process, do you dive right in, or plan out the story first?

For Dead Gone, I planned out about two thirds of the story, using chapter headings. So, I had the bones of the book with various word documents with different titles. Of course, the best laid plans of mice and scouse-italian blokes etc etc… I ended up scrapping most of those chapters and just writing one piece of the story at a time, before the ending came to me after a few abandoned attempts.

The second – as yet untitled – book I’ve just completed was written completely. I knew the end chapter going in. I also knew what happened in the middle few chapters, but that was about it. I also wrote a lot more which didn’t make it into the final version than I did for Dead Gone.

I think I’m still trying to find the way that works best for me!

DEAD GONE is a fabulous debut. What was your route to publication?

Pretty standard, I think. I identified a literary agent I wanted to work with pretty early on in the process, and after being turned down by him a few times, he eventually relented and took me on. We sent the book out to numerous publishers, with most turning it down, but Avon (an imprint of HarperCollins) have been nothing but enthusiastic about the book since the beginning. Going with them was a very easy decision.

And lastly, what else does 2014 have in store for you?

Starting out with a number of book signings around Merseyside. Lots of lovely independent bookshops to visit, which I’m really looking forward to.

I’ve just delivered book two to my editor, so most of the year will be taken up with making that better. I’ll also be visiting a number of festivals this year, as has become the norm for me now. Crimefest in Bristol and Theakstons Crime Festival in Harrogate are now what I plan my year around!

Hopefully sleep at some point.

Oh, and buy a new guitar. I’ve wanted a new one for years, so hopefully I’ll get chance to treat myself to one soon!

Sounds like it’ll be a busy (and fantastic) year!

A huge thanks to Luca Veste for dropping by the CTG blog. To find out more about Luca and his books pop on over to his wonderful blog at http://lucaveste.com/

DEAD GONE is out now. Watch for our review coming soon …