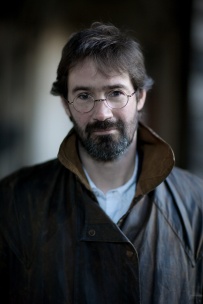 Another of the events I can’t wait to see at Bloody Scotland is the Sunday 11.45am INTO THE DARK panel with Malcolm Mackay, James Oswald and Craig Robertson. These bestselling writers know a thing or two about the dark side of human nature, and I think their panel on the subject will be totally fascinating. So, in advance of the festival, I thought I’d put a few questions to them, to get them warmed up …

Firstly, for those new to your work, can you tell us a little bit about your latest novel?

MALCOLM: For Those Who Know the Ending opens with Martin Sivok tied to a chair in an empty warehouse, bleeding from the head. As the story spools back to reveal the journey that’s led him here we follow two men, Martin and Usman Kassar, coming at organised crime from different directions, risking the wrath of the dangerous Nate Colgan as they test the value and limits of loyalty.

JAMES: The sixth instalment in the ongoing Inspector McLean series, The Damage Done sees Tony McLean with egg on his face when a raid on a suspected brothel goes spectacularly wrong. Expecting to find prostitutes and clients, instead the police interrupt a private swingers party. Investigating how their intelligence could have been so badly wrong, McLean finds alarming similarities with another raid, twenty years earlier, but when he begins to look deeper he opens up a nasty can of worms.

CRAIG: Murderabilia is my seventh novel and the fifth featuring DI Rachel Narey and her partner, photographer Tony Winter. It revolves around the pursuit of serial killer collectibles, something most people won’t have heard of but which is big business online. There are a number of specialist websites selling items related to killers and Rachel gets reluctantly drawn into this world after items go missing from a murder scene. There is often a high price to be paid for murderabilia – as Rachel and Tony find out.

MALCOLM: Well the event promises to explore the dark side of human nature, which is a slightly worrying thought. In the true spirit of Bloody Scotland I doubt it’ll stay too grim for too long.

JAMES: I’m really not sure. A hangover? The title of the discussion is Into the Dark, so maybe they’ll just turn the lights off? Seriously though, I imagine we will be examining the enduring appeal of tales that delve into the darker side of human nature. Why are we drawn to the worst in people and so fascinated by the horrible things they do? I don’t think it will be for the faint-hearted.

CRAIG: Revelations, insight laughs, shocks. All three of us tend to enjoy delving into the dark side of humanity and it will be fun to explore the psychology of that during the event. I’m keen to know what attracts James and Malcolm to that side of the genre and what it says about them – and me. I’ve appeared with both of them before and know that as well as being terrific writers, they’re fascinating to listen to too.

Bloody Scotland is one of my favourite crime fiction festivals. What makes it great for you?

MALCOLM: This will be my third Bloody Scotland, and it’s always been a brilliant experience, laid back and friendly, like a gang of old mates taking a weekend to recharge batteries and gain inspiration for future acts of fictional criminality.

JAMES: I’ve been to every Bloody Scotland since it started, so I’m something of an old hand. The panels are always great and informative, but what I most like is meeting up with other writers, chatting with readers and generally relaxing for a weekend. So what makes it great for me? I’d have to say the bar.

CRAIG: Well I’m a bit biased because I’m one of the festival organisers and have been for its five-year existence. I like to think Bloody Scotland is friendly and fun, welcoming and a bit different. We try to think outside the box so events like Crime at the Coo, the crime writers football match and holding a play in Stirling’s Sheriff Court are what makes us what we are. There is also a great opportunity for readers and authors to mingle and we encourage that.

And, lastly, do you have any pre-panel routines, green room riders, or quirky foibles, that you’ll have to do before you go on stage?

MALCOLM: If turning up slightly late and terribly baffled counts as a routine then I’ve got it down to an art form.

JAMES: Boringly, no. Like most writers, I am something of an introvert. The thought of talking to a crowd of people fills me with sweaty-palmed dread. The reality of it has turned out to be a much better experience though. I spent a few years working as an Agricultural Consultant and that has been good training in public speaking. Farmers are a hard audience to please, especially the ones who’ve only come for the free food and a beer. Talking to people who are interested in crime fiction, or just writing in general, is genuinely one of the best parts of being a published author, and I’ve never really found it necessary to calm my nerves before going on stage. I get to wear my famous pink jacket though. I suppose I would feel naked without it.

CRAIG: For luck, I always read a chapter of Raymond Chandler’s Farewell My Lovely written in the original Spanish then sing the first two verses of the Star Spangled Banner. In the green room, I have to have a bowl of red smarties and small glass of chartreuse. Apart from that, I just go on stage and make stuff up as I go along.

You heard it here folks, be sure to get a ticket for the INTO THE DARK panel for an hour of revelations, laughs and shocks, and perhaps a few red smarties if we can wrestle them away from Craig!

Huge thanks to the terrific MALCOLM MACKAY, JAMES OSWALD, and CRAIG ROBERTSON for chatting with me in the run up to the fabulous BLOODY SCOTLAND CRIME WRITING FESTIVAL.

It’s not too late to get yourself a ticket for the INTO THE DARK panel. Hop over to the BLOODY SCOTLAND website and grab one quick at www.bloodyscotland.com

To find out more about MALCOLM MACKAY follow him on Twitter @malcolm_mackay and FOR THOSE WHO KNOW THE ENDING is out now, you can buy it here

To find out more about JAMES OSWALD follow him on Twitter @SirBenfro and THE DAMAGE DONE is out now, you can buy it here

To find out more about CRAIG ROBERTSON follow him on Twitter @CraigRobertson_ and MURDERABILIA is on the 8th September, you can pre-order it here

THE BLOODY SCOTLAND CRIME WRITING FESTIVAL is held in Stirling from the 9th – 11th September 2016. It’s a fantastic programme. Find out more at their website here and be sure to follow them on Twitter @BloodyScotland to stay up-to-date with all their news