Whose Crime Is It Anyway? (c) Eoin Carey

The Bloody Scotland Crime Writing Festival is one of those festivals that goes from strength to strength. This year the organising team, led by the ever sparky Dom Hastings, put on a fabulous programme of events from panels to interviews, an awards dinner, a pub cabaret, and a football match – there really was something for everyone. In fact, it was so good it’s taken me a week to recover enough to blog about it!

The weekend kicked off with Val McDermid and Peter May in conversation, followed by Whose Crime is it Anyway? – with TV presenter Hardeep Singh Kohli throwing out the challenges to crime writers Christopher Brookmyre, Kevin Wignall and Caro Ramsay to improvise on the spot. Once the opening events finished, as ever at crime writing festivals, the rest of the evening was spent in the bar at the Stirling Highland Hotel with a glass of wine (or two, or three …). 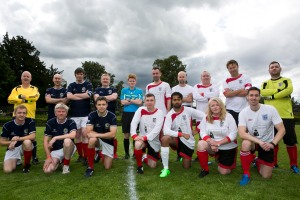 On Saturday, I wasn’t able to get to many events as I was in training for a special performance with The Slice Girls at the Crime in the Coo event later that evening. But I heard great things about the Killer Women panel – Louise Millar, Helen Giltrow, and MJ McGrath – who discussed whether the Woman is deadlier than the Male? The thought provoking Self Publishing session with Alexandra Sokoloff and Allan Guthrie, and the New Crimes panel with debut authors Lucy Ribchester (The Hourglass Factory), Chris Dolan (Potter’s Field), SJI Holliday (Black Wood) and Mark Legatt (Names of the Dead) – which all sound like fabulous reads.

In the afternoon, in a brief pause between practices, I did get along to the Breaking the Law panel which had dynamic law buffs Steve Cavanagh, Neil White and Jeffrey Siger, along with Craig Sisterson, talking about the difference between the law in crime thrillers and crime fact, how they draw on their real life experiences in their writing, and the legal thrillers that they especially admire. After that, it was a quick sprint to get ready for the Crime in the Coo before meeting my fellow Slice Girls for one final practice (more about that on the blog tomorrow!)

After a late, late night on Saturday, my start on Sunday wasn’t especially early! The first event I got along to was the Thriller panel with Simon Kernick, Tom Wood, G.J. Brown and Mason Cross. In a lively debate they talked locations – whether to visit them or not, and the perils if you don’t, the fun of writing “lone wolf” characters, and about their routes to publication (the key, so they say, is not to let rejection stop you).

Then, with the sky getting darker by the minute, it was a short walk up the hill to the bowling green at Cowane’s Hospital where the Bloody Scotland Crime Writers Football Match: Scotland v England was happening. After Scotland’s convincing win last year there was a lot at stake, and as the game kicked off both teams looked very determined. In a tense game, where the players had to contend with alternating sunshine and pouring rain, the two sides looked pretty evenly matched with goal keepers Luca Veste (England) and Craig Robertson (Scotland) kept busy as both sides battled it out to win.

The Scotland goals came from Mark Stanton, Christopher Brookmyre, and Doug Johnstone (3). For England the scorers were Vincent Holland-Keane (2), Col Bury (2) and Howard Linskey. The team captains – Ian Rankin (Scotland) and Simon Kernick (England) held the trophy aloft and then, as the rain got heavier, it was time to trot back down the hill (to the bar!).

The final event of the festival was Literary Agent, Jenny Brown, interviewing bestselling crime thriller writer, Linwood Barclay, who was on his first visit to Scotland. To a packed audience, Linwood talked about his writing career, his latest book Broken Promise – the first of a sequence of three connected stories – and on creating a story with a killer hook. Very interesting and highly entertaining, this was the perfect session to end the festival with. Then it was back to the bar, for one final night, before setting off home the next morning.

Next year the Bloody Scotland Crime Writing Festival runs from 9 – 11 September 2016. If you love crime fiction then you absolutely need to be there – put the dates in your diary and book a hotel, now! Trust me, this is one festival that you won’t want to miss out on.

But, of course, there’s something that I haven’t told you about in this blog post – just what happened at Crime in the Coo on Saturday night.

If you want to know, pop back tomorrow for my “(Not so) Secret Diary of a Slice Girl post.

In the meantime, here’s a sneaky peep …

The Female in Crime Fiction panel being introduced

Last weekend was Bloody Scotland 2014. This hugely friendly and welcoming crime writing festival is going from strength to strength. Now in its third year, the festival played host to a plethora of crime writers in three days of entertaining, informative and massively fun events.

Having spent the best part of seven hours on trains travelling from my home to Stirling, I met up with some friends at the Stirling Highland Hotel and then headed over to Hotel Colessio for Mark Billingham and Stuart McBride’s Dead Funny event. As with the Billingham and Brookmyre double act last year, Billingham and McBride answering questions from readers (allegedly) made for a hilarious evening with McBride’s dark poetry, and the skilful answering by both authors of some rather random questions from the audience, real high spots.

Next morning, Saturday, I helped out SJI Holiday (acting as her notetaker) at an interview with Kati Hirekkapelto, author of fabulous book The Hummingbird, before having a quick walk around Stirling – seeing the Castle, the city walls, and peering into the old Gaol.

Then it was off to the New Blood/Fresh Meat panel featuring Eva Dolan, Hania Allen, and Mason Cross. Each of the panel began by reading from their debut novels – three different styles and stories, and all super gripping. Then, led by moderator Peggy Hughes, they spoke about how they got the idea for the novel, the research they did, and what their route to publication was like.

At the same time, the Scotland versus England 5-a-side Football match was taking place. With Ian Rankin captaining Scotland and Mark Billingham captaining England there was a good turnout to watch the battle commence and the #BloodyScotland twitter feed was alive with score updates and photos. After a tense game, the final score was Scotland 13 – England 1, and the magnificent silver trophy went to Scotland.

Next up, I went along to The Female in Crime Fiction (in association with Glasgow Women’s Library) panel with Yrsa Sigurðardóttir, Lin Anderson, and Catriona McPherson. The panel debated female protagonists in crime fiction (including how many crime books would pass the Bechdel test which looks at whether a work of fiction features at least two women who talk to each other about something other than a man), the joy of reading a thriller that compels you to turn the page (crime writing top tip – always keep the secret withheld as long as you can!), and why it might be that women make up more than half the readership of crime fiction.

The next panel featured Luca Veste, Michael Malone, and Martyn Waites, chaired by Mark Billingham. This lively and entertaining panel discussed their most recent books, the importance of location and why they’d chosen to locate their books where they had, how they go about doing research, their route to publication and how Martyn Waites came to take on his alter ego – Tanya Carver.

The final event of the day was Ian Rankin in conversation with Kathy Reichs. This session in the Albert Halls seemed to fly by with Kathy Reichs talking about her route to publication, what it’s like working on a long running TV show (having to think up new murders after 200 episodes being one of the challenges!) and what it’s like co-writing a YA series with her son.

Then it was off to dinner with friends at the amazing Maharaja curry house before chatting in the bar well into the early hours.

On Sunday I was actually part of an event rather than just watching. Having submitted a 100 word synopsis for the Pitch Perfect session I was excited (and terrified) to hear that my story was one of seven that had been picked to be pitched. Along with the other six pitchers I was ushered into the green room and introduced to the wonderful Jenny Brown who chaired the session. From there it was on to the event with publishers Alison Hennessey (Harvill Secker), Krystyna Green (Constable & Robinson) and Tricia Jackson (Pan MacMillan) on the panel. Each pitcher had three minutes to pitch their story. There were some great pitches, and I think it was probably the longest three minutes of my life! But good fun and I’d definitely recommend it. The panel were friendly and their feedback hugely helpful, and Margaret Stewart was a most deserving winner.

And then it was over.

As I set off on my journey home, I reflected on what a fantastic weekend I’d had – great panels, a fabulous location, a warm and friendly atmosphere and the chance to catch up with all my writerly pals.

The seven hour trip was definitely worth it.