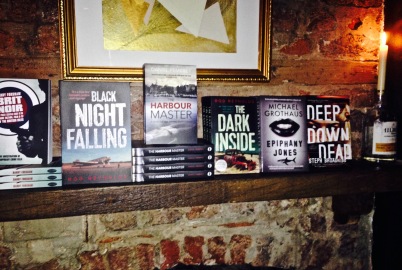 After a cracking start to the week at a super fun speakeasy event downstairs in The Vault at Milroy’s of Soho we’re on an alcohol theme here at CTG HQ.

On Tuesday night, Daniel Pembrey, Rod Reynolds, Michael Grothaus and me chatted about ‘Spirits in Noir Fiction’, moderated by expert noirist Barry Forshaw. There was bookish conversation, whiskey cocktails (I can recommend the Smoking Gun) and the fabulous folks from South Ken Books created a pop-up bookstore around one of the fireplaces! [Hop over to the lovely Joy Kluver’s blog here to read a full write-up from the event]

At the event, Daniel Pembrey talked about his new book NIGHT MARKET which is out in e-book today. This is the sequel to the fabulous THE HARBOUR MASTER and Detective Henk van der Pol is hitting the Dutch gin. As you may already know, Henk likes to have a beer and a gin chaser; it’s sometimes called a kopstoot in Amsterdam (headbutt), or a duikboot in Flanders (submarine).

You can buy NIGHT MARKET on Kindle here

THE COMPETITION: To toast the launch of this Harbour Master sequel, Daniel is giving away a bottle of Mirakel van Amsterdam – single old grain, Henk’s favourite, and originating from centuries-old independent Amsterdam distillery Van Wees. Trust me, this is a bottle you want in your drinks cabinet – though don’t have it within too easy reach if you want to keep temptation at bay! (I believe the seal is unbroken.)

TO ENTER: email Daniel, danielpembrey@gmail.com, saying where you found the first occurrence of Henk ordering a beer-with-gin-chaser in Night Market

The winner will be picked on 5th February.

How about some bourbon with your books?

On Tuesday 24th January I’m joining the fabulous Daniel Pembrey, Rod Reynolds, Michael Grothaus, and noir grand master Barry Forshaw (who’ll be cracking the whip) to talk about spirits in (and in the writing of) crime fiction.

As well as the alcohol based discussions, you’ll find out which of us:
– partied with the Hollywood A-list and has dirt on all of them
– trained as a bounty hunter in California
– has Jilly Cooper on speed dial
– has interviewed the world’s top authors and -literally- wrote the book on crime fiction
– has a terrifying stare but is really a pussycat

Tickets are FREE but space is strictly limited so jump over HERE to sign up – takes 2 seconds.

Hopefully see you there!! 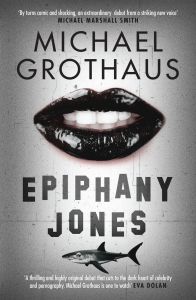 Today I’m delighted to be hosting a stop on The Epiphany Jones Blog Tour, and am handing over the hot seat here at CTG HQ to  Michael Grothaus to talk about why dissatisfaction is important in writing well.

Michael is a novelist and journalist who spent years researching sex trafficking, research which is put to use in his debut novel EPIPHANY JONES. Born in Saint Louis, Missouri, he has a degree in filmmaking, and as a journalist writes about creativity, tech, subcultures, sex and pornography, and the effects of mass media on our psyches.

The Importance of Dissatisfaction In Writing Well

In my novel EPIPHANY JONES there are two main characters. There’s Epiphany, for whom the book is named after, and then there’s Jerry Dresden. As you’ll soon discover when you start to read the book, Jerry isn’t in a good place when the story begins. He suffers from a horrible psychological affliction where he sees people who don’t really exist and he can interact with them—having conversations, even being able to “feel” them when he “touches” them—as easily as you or I can interact with each other.

But what those same readers are right about is the anger. That dissatisfaction Jerry feels? That comes from me—at least part of it. And that dissatisfaction, I believe, is essential to being a good writer. Why? Because I’ve never met anyone who was completely satisfied, content, and happy who could write well.

I know people who want to “be writers” (whatever that means) who are wealthy, or privileged and never wanted for anything, or have never had a health problem, or never experienced significant loss—and none of them can write well. I know people who don’t care about politics, or the environment, or poverty, of the suffering that goes on around the world—and none of them can write well.

These people are not bad or stupid or foolish—indeed, they are all very fortunate (or lucky). Yet because of this rare good fortune they lack dissatisfaction, which is the single most important resource that writers have—if they use it wisely. Dissatisfaction spurs anger and anger can be used productively. Productively, it’s what gets you in front of your keyboard to write a story holding a mirror up to society so it can see itself as it really is. It’s what spurs you to write characters that challenge readers’ assumptions about why people are the way they are. It’s what allows you to create worlds as which you wish ours would be (or warn against what ours may become).

As for me, I’m dissatisfied with things in life: our obsession with celebrities when there are real issues to pay attention to; the prevalence of sex trafficking that goes mostly unnoticed; the hypocrisy of those who condemn people with addictions but have their own vices securely locked away from prying eyes.

Big thanks to Michael for chatting to us on the CTG blog today.

Michael’s debut novel EPIPHANY JONES is out this month. Here’s what the blurb says: “A man with a consuming addiction. A woman who talks to God. And the secret connection that could destroy them both … Jerry has a traumatic past that leaves him subject to psychotic hallucinations and depressive episodes. When he stands accused of stealing a priceless Van Gogh painting, he goes underground, where he develops an unwilling relationship with a woman who believes that the voices she hears are from God. Involuntarily entangled in the illicit world of sex-trafficking amongst the Hollywood elite, and on a mission to find redemption for a haunting series of events from the past, Jerry is thrust into a genuinely shocking and outrageously funny quest to uncover the truth and atone for historical sins.

A complex, page-turning psychological thriller, riddled with twists and turns, Epiphany Jones is also a superb dark comedy with a powerful emotional core. You’ll laugh when you know you shouldn’t, be moved when you least expect it and, most importantly, never look at Hollywood, celebrity or sex in the same way again.”

And be sure to check out all the other great stops on the blog tour: