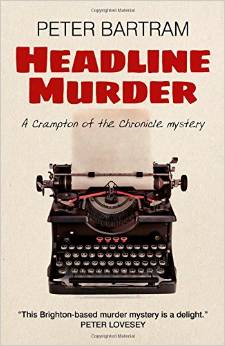 Today I’m delighted to welcome Peter Bartram, author of HEADLINE MURDER, to the CTG blog to tell us about the inspiration for his new Crampton of the Chronicle crime mystery series …

The seed for my new Crampton of the Chronicle series of crime mysteries was sown a couple of weeks after I took my first job as a reporter on a newspaper. But I only realised this years later.

I came into the newsroom one morning and the chief reporter told me to get round to the magistrates’ court double quick. Our normal court reporter was off sick.

This was the first time I’d been on a court reporting job. One of the cases concerned a young fellow who’d been charged with being drunk and disorderly. He was fined £5.

Even as a rookie reporter, I knew this story didn’t merit even a single column inch. But as I made my way back to the paper, the bloke lay in wait for me. He flexed his not unimpressive muscles and made it clear that if a word appeared in the paper, I better watch my back.

As I hadn’t anyway intended writing about his pathetic tale of puking on the highway, I passed on my way musing reflectively on how the chief reporter had been more right than he knew when he said I would meet interesting people. I mentioned the incident to him when I got back to the newsroom. He passed it on to the news editor. Who talked to the editor.

And he decided the story would be written as long as possible for the front page. Threaten the Fourth Estate and take what’s coming to you!

I decided to take a precautionary measure after the piece appeared. I knew of several hotels in town where if you went in the front door, you could thread your way through endless corridors and pop out at the back in a different street, usually after passing through the staff’s quarters. An ideal way to throw a troublesome follower off your tracks.

As it happened, I never had to use the ruse, but I remembered it years later when I was writing Headline Murder. And I guess that early experience must have been one of the memories that made me realise that a crime reporter could be a great protagonist in a mystery novel.

Anyway, here is an extract from the scene where our hero, Colin Crampton, crime reporter on the Brighton Evening Chronicle, has to throw a rival journo off his tail …

So as I stepped into the street, I stooped to re-tie my shoe lace and had a quick shufty at who was about. I wouldn’t put it past Houghton [crime reporter on the rival paper] to put a tail on me. The street was busy with shoppers. A couple of middle-aged matrons pushed passed me laden with shopping bags from Hannington’s. An old gent with a bowler hat and striped trousers ambled along smoking a pipe. A fancy piece wearing stilettos like daggers tottered by with a poodle on a leash.

Shoppers don’t spend much time standing in the same place. So it wasn’t difficult for me to spot Houghton’s nark. He was a young lad lounging beside the phone box on the other side of the road. He was reading the midday edition of the Chronicle. A nice touch to read the Chronicle rather than the Argus, his own paper. But not nice enough. He wasn’t waiting to make a call because the phone box was vacant. He’d have done better to stand inside and pretend to be on the phone. If you have to stand still when you’re on the qui vive, go somewhere where your target expects to see standing people. Such as a bus queue.

So after I’d re-tied my shoe, I headed towards The Lanes, the maze of eighteenth century passages in the centre of the town. As I sauntered into Meeting House Lane I caught a glimpse of his reflection in a shop window. Peregrine was doing well but he wouldn’t be ready for what I had in mind.

I hurried through The Lanes, turned right on to the seafront and walked towards the Old Ship Hotel. I slowed down and gave my tail a chance to come round the corner so that he could see me step into the hotel.

Peregrine didn’t disappoint. He still had his copy of the Chronicle under his arm as he bustled round the corner. I slipped in the door and made my way through the foyer to the restaurant. I entered the restaurant which was empty – the lunch service had long finished.

On the far side of the room were two service doors used by waiters to get between the kitchen and restaurant. I hurried over to one of them. Looked quickly behind to make sure my tail was out of sight. Slipped through the door.

In the kitchen Antoine, the head chef, was in the middle of berating a sous chef about some canapés. I caught a few choice words that hadn’t been in my school French dictionary. Antoine was everything you’d expect of a French chef – fat, quixotic, temperamental. He had a handlebar moustache and a goatee beard. He’d taken off his toque and was mopping his high forehead with a red polka dot handkerchief. When he saw me, he turned from the hapless sous chef.

“Colin, I am working with idiots. But you have come to speak with me. No?”

“No. I’m just passing through, Antoine. You haven’t seen me.”

“I get it.” He tapped the side of his large Gallic nose. “You are on one of your histoires, n’est ce pas?”

“D’accord. Just need to avoid someone.”

“Antoine’s kitchen is the gateway to freedom. No?”

“And the temple of the gastronomie magnifique. No?”

“But you must try one of these caviar canapés before your – how you say? – disparition. No?”

He grabbed the platter from the sous chef and shoved it towards me. The canapés looked good. I took one and bit into it.

“Délicieux,” I said. “But I must go. If anyone comes after me, see what you can do to hold them up.”

“Leave it to me,” Antoine said. “I give him caviar canapés sprinkled with – what you call? – Kruschen Salts.”

“That should slow him down a bit,” I said.

“The caviar hides the taste of the salts. No?”

“Ici.” He pointed to his ample rump.

“Don’t give him too large a dose,” I said. “He moves in elevated company.”

I crossed the kitchen and went out through the back door.

Big thanks to Peter Bartram for stopping by today and telling us about his inspiration for HEADLINE MURDER and the Crampton of the Chronicle crime mystery series.

Be sure to check out Peter’s website at http://www.peterbartram.co.uk

HEADLINE MURDER (published by Roundfire Books) is out in paperback and e-book today.

To see the book on Amazon click on the book cover below: