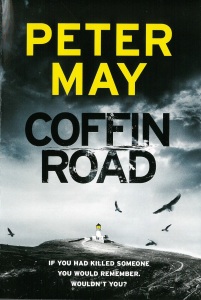 Today I’m delighted to be hosting part seven of Peter May’s Big Coffin Road Blog Read. Today’s extract is ‘The Body’. If you’ve not had a chance to read the first six extracts from Coffin Road, skip down to the bottom of this post for details of the fabulous blogs you can find the extracts posted on. Then, it’s onto ‘The Body’ …

It is with a great sense of dissatisfaction that I leave the lighthouse, finally, locking it up behind me and replacing the keys below the stone. I have learned nothing, least of all about myself. The first spots of rain whip into my face on the edge of a sudden squall, and as I hurry from the gate I see rain sweeping in from the south-west, a long trailing arm of it, darker even than the cloud from which it falls. I start down the steep concrete path, but realise I will never reach the boat before the rain hits. And it is too late to go back. Instead, I make a dash for the ruined chapel, which is just a short sprint away across the grass. Its roof of stone and turf has collapsed in places, but still affords a degree of shelter. I stoop beneath the lintel of the open doorway, and turn to look out and see the island vanish in the rain that sweeps across it like mist.

I move back, then, into the chapel and stumble on something beneath my feet, having to steady myself with outstretched hand on the cold, damp wall. There is very little light, and it takes some moments for my eyes to adjust.

At first I find it hard to believe what I am seeing. A man is lying spreadeagled on the floor, legs outstretched and twisted at an impossible angle. His head is half turned, and I can see where it has been split open, pale grey brain matter congealed in the dried blood that has pooled around it.

I feel acid rising in my throat, from shock and revulsion. I swallow it back, and find myself gasping for breath. My legs have turned to jelly beneath me and will hardly support my weight. After several long seconds, I crouch down, fingertips on the floor to steady me, and force myself to look at his face. He is an older man, grey hair thinning. Mid, perhaps late, fifties. Corpulent. He wears an anorak and jeans, and what look like relatively new hiking boots. If he is known to me, I have no memory of him. But it is clear that he has not been freshly killed. Certainly not today, and probably not yesterday. And since there is no decay that I can see, or smell, he cannot surely have been dead for more than a few days.

A crack in my mind’s defences opens up to allow in the unthinkable. Three days ago I was here. On this island. The next day I was washed ashore on the beach at Luskentyre, all memory lost in a cloud of black dread, knowing that something terrible had occurred.

I look at this man lying on the floor in front of me, his head smashed in, and I ask myself the question that has been clotting in my stream of consciousness. Was it me who killed him?

I close my eyes, fists clenching, sick to my stomach at the thought of it. But it is a thought that won’t go away, growing inside me like a cancer. Is this why I have blocked all memory of the past? I stand up too quickly, blood rushing to my head, and stagger to the door, supporting myself on the stone as I lean out into the wind and rain to throw up acid and coffee.

I am shaking, tears springing to my eyes with the burning of the acid. It feels as if the earth has opened up beneath my feet and I am falling helplessly into eternity, or hell, or both. A short way off, to the east, I hear the growl of the sea as it rushes into a deep cleft in the cliffs nearly 200 feet below. And I am startled to see a group of people in brightly coloured waterproofs, fighting their way up the concrete path towards the lighthouse, leaning into the wind and the rain. Tourists, I realise. A group almost certainly brought out on Seatrek’s inflatable RIB from Uig, and landed below just before the squall struck.

Now shock at the thought that I might have killed this man combines with fear of being caught. Blinded by panic, and robbed of all reason, I dash out on to the slope just as the rain passes and a momentary break in the cloud sprinkles sunshine across the island like fairy dust. The tourists have almost reached the lighthouse above me, and I don’t look back to register if I have been seen. Locked instead in my cocoon of denial, I slither down the wet concrete and run down the steps with an almost reckless disregard for my own safety. 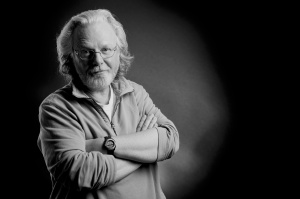 Below me, Seatrek’s red and black Delta Super X RIB rises and falls on the swell, anchored a few feet away from the jetty. I see a man waiting aboard her for the tourists to return. He calls to me as I reach the foot of the steps as if he knows me, voice raised above the wind and the sea. But I ignore him, dragging my tender back down the steps and leaping recklessly into her, almost capsizing her in the process. I don’t even look in his direction as he calls again, pulling instead on the starter cord, almost frantic in my desire to be gone from this place. It coughs into life on the third pull, and I gun the throttle, banking away against the incoming waves to race out across the bay to where Coinneach’s Sundancer awaits me.

I nearly fall overboard as I transfer from one to the other, but scramble safely on to the stern, before hauling the inflatable aboard and tethering her. I fire up the motor and accelerate hard away to the south-east. I look back only once as I round the eastern tip of Eilean Tighe, and see the distant figure of the man who called to me still standing in his boat, watching me go.

Coffin Road by Peter May is out now in hardback (Quercus). Here’s the blurb: “A MAN is washed up on a deserted beach on the Hebridean Isle of Harris, barely alive and borderline hypothermic. He has no idea who he is or how he got there. The only clue to his identity is a map tracing a track called the Coffin Road. He does not know where it will lead him, but filled with dread, fear and uncertainty he knows he must follow it. A DETECTIVE crosses rough Atlantic seas to a remote rock twenty miles west of the Outer Hebrides of Scotland. With a sense of foreboding he steps ashore where three lighthouse keepers disappeared more than a century before – a mystery that remains unsolved. But now there is a new mystery – a man found bludgeoned to death on that same rock, and DS George Gunn must find out who did it and why. A TEENAGE GIRL lies in her Edinburgh bedroom, desperate to learn the truth about her father’s death. Two years after the discovery of the pioneering scientist’s suicide note, Karen Fleming still cannot accept that he would wilfully abandon her. And the more she discovers about the nature of his research, the more she suspects that others were behind his disappearance.”

You can buy your copy here

FOR A CHANCE TO WIN a hardback copy of COFFIN ROAD here’s what you need to do:

Tweet the link to this post (using the Twitter button below) OR retweet one of the CTG tweets about the giveaway. [You’ll also need to follow me on Twitter, so that I can send you a direct message should you win]. Rules (1) One entry per reader (2) UK residents only – due to postage costs – sorry! (3) I will draw the winner at random (4) No cash alternative (5) The competition closes for entries at 9pm GMT on Friday 22nd January 2016 (6) The judge’s decision is final and no correspondence will be entered into.

*** THIS COMPETITION HAS NOW CLOSED AND THE WINNER NOTIFIED ***

And, don’t forget to check out all the other fabulous extracts on The Coffin Road Blog Read here …