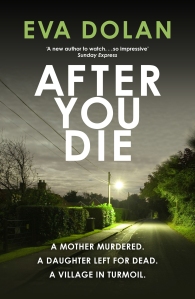 Today I’m delighted to be hosting a stop on Eva Dolan’s AFTER YOU DIE Blog Tour and to have Eva joining me on the CTG blog to chat about writing the fabulous Zigic and Ferreira series and to tell us more about the latest brilliant book in the series – AFTER YOU DIE.

So, to the questions …

Your latest book AFTER YOU DIE is published this month, can you tell us a bit about it?

After You Die opens with a gas explosion at a pair of cottages in an affluent commuter village, which reveals the corpse of a young mother and, upstairs, the body of her paralysed daughter who has died as a result of neglect. Zigic and Ferreira are called in to investigate after it becomes clear that the family have been subjected to months of harassment linked to the daughter’s activities as a prominent right to die advocate.

It’s a book about the grinding torment of online harassment and the expectations put on carers, but more than that it’s about what happens to a family in the aftermath of a personal tragedy.

AFTER YOU DIE is the third book in the Zigic and Ferreira series and takes the detectives out of Peterborough centre and into a smaller, village location – what prompted you to change the setting for this story?

Partly it was a desire to show a different side to Peterborough. I’d shown the worst of it in the first two books and it’s easy to believe that ‘nicer’ areas don’t suffer crime to the same degree as the inner city, and that was something I wanted to challenge.

Also, the nature of this crime, being motivated by a personal form of hatred rather than an overtly political one, gave me an excuse to examine how a murder can unbalance a different kind of community, one which sees itself as comfortable, more genteel, the kind of place people move to in order to escape from city centre criminality. I liked the idea of having this quite insular village where all the players are in close proximity and their shared history remains inescapable.

All your books stand out for me in that you seem to effortlessly blend hard-hitting social issues with engaging and fast-paced crime fiction. What is it that interests you in a story idea and what’s your process for turning that initial spark into a book?

Thank you very much! Because the series is set in a Hate Crimes Unit I don’t actually have total free range over the subject matter of the books – they have to be based on crimes which are motivated by prejudice over race, religion, disability, homophobia or transphobia, otherwise Zigic and Ferreira wouldn’t be investigating them. So it does automatically rule out quite a lot of storylines. But it’s a welcome limitation because it means I have to find crimes which are outside the ordinary.

In After You Die the initial inspiration was the case of Fiona Pilkington and her family who had been harassed and abused for years as a result of her daughter’s disability. They were ignored by the police, left to fend for themselves, until Fiona couldn’t take anymore. She killed her daughter and herself. It was a heart-breaking case and spurred me on into researching the rise of disability related hate crimes, which made for incredibly depressing reading. Mencap believe 90% of people with a disability have been victims of some form of hate crime, which is a staggering statistic.

The image of a mother and daughter under siege, stuck with me, and as I started working on characters Holly – the daughter – came through as a very strong voice, defiant despite the terrible injuries she’d suffered, a strong, opinionated young woman determined to fight off the bullies with her intelligence and eloquence. 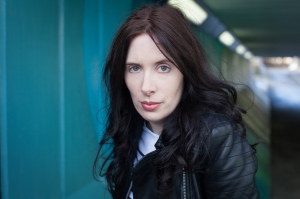 Over the first three books of the series you’ve thrown a lot at Zigic and Ferreira in their personal lives as well as professionally. Do you have the series mapped out, or does the action unfold organically as you write?

I map out each book in quite a lot of detail but I prefer to let Zigic and Ferreira’s personal lives unfold organically. It’s more interesting for me to keep finding out new things about them as the series continues, and hopefully for the reader too.

So far I think they’ve got off fairly light for fictional coppers! Zigic especially has a calm and happy family life; I’m increasingly tempted to throw him a major curveball to see if it shakes him out of being such a good man. He’s been perfectly morally upstanding so far but I feel there’s a darkness in him which I haven’t quite drilled down into yet.

Just to contradict myself, I do know what’s coming up for Ferreira in personal terms. It wasn’t planned but she’s stumbled into a bad situation in book four and, even though she doesn’t realise it yet, the blowback is going to be pretty major!

As a reader of crime fiction, what authors and/or books have influenced or inspired you?

I’ve been rereading some of the early Rebus books lately and even though I’ve always cited them as a major influence I didn’t realise just how deep that went until I revisited the ones I was reading as a began my writing career. Without them and John Harvey’s books – both the Resnick and Frank Elder series – I wouldn’t have become a crime writer. They created the template for socially engaged, politically cynical crime fiction for me.

I’m currently finishing off book four – would like to give a little teaser about it but I’m way too superstitious to discuss work in progress. After that… editing and more writing and then I’ll be out promoting After You Die, which let’s be honest, is the best part of being a writer. I’m hugely looking forward to Essex Literary Festival and ChipLitFest, and there are a couple more events I probably shouldn’t mention yet but judging by previous visits, they will be loads of fun.

A massive thank you to Eva Dolan for popping along to the CTG blog today and chatting to us about her new book AFTER YOU DIE and her writing process.

AFTER YOU DIE by Eva Dolan is out now. Click here to buy it from Amazon

And you can see Eva Dolan in person, speaking at Essex Book Festival, on Monday 23rd March at 7.30pm http://essexbookfestival.org.uk/event/sceneofthecrime/

Also, be sure to check out all the other fabulous stops along the AFTER YOU DIE Blog Tour … 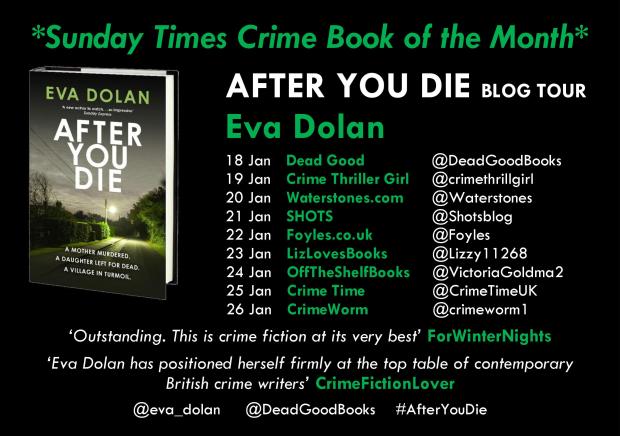 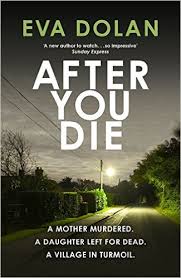 What the blurb says: “A gas leak in a picturesque Fenlands village leads to the discovery of two bodies – a mother brutally murdered, and her severely disabled teenage daughter left to die of neglect. Dawn Prentice was already known to the Peterborough Hate Crimes Unit, the previous summer she had logged a number of calls detailing the harassment she and her severely disabled teenage daughter were undergoing. Now she is dead – stabbed to death whilst Holly Prentice has been left to starve upstairs. DS Ferreira, only recently back serving on the force after being severely injured in the line of duty, had met with Dawn that summer. Was she negligent in not taking Dawn’s accusations more seriously? Did the murderer even know that Holly was helpless upstairs while her mother bled to death?

Whilst Ferreira battles her demons, determined to prove she’s up to the frontline, DI Zigic is drawn into conflict with an official seemingly resolved to hide the truth about one of his main suspects. Can either officer unpick the truth about mother and daughter, and bring their killer to justice?”

AFTER YOU DIE is the third book in the Zigic and Ferreira series, and a stunning addition to a crime fiction series that is going from strength to strength.

DI Zigic and DS Ferreira are a great duo, but the explosive events at the end of book two – TELL NO TALES – have left them scarred and battling doubts and fears that they both try to hide from those around them and, at times, from each other. Ferreira is determined to prove she’s fit and well enough to be working a murder case, and Zigic is feeling the pressure of juggling work with the demands of a young family and increasing concerns about his work partner’s ability to cope.

The murder of Dawn Prentice, and the knowledge that her teenage daughter was left to die alone, impacts them both and as they start investigating, and unravelling the complex layers of hurt, guilt and secrets surrounding what happened to Dawn and Holly Prentice, both detectives find themselves becoming more emotionally involved in the case than usual.

Beautifully written and grittily complex, through following Zigic and Ferreira’s investigation this sensitively nuanced story explores the impact of the events on the shocked community, while exposing a myriad of dark truths hidden behind closed doors and twitching curtains.

This gripping thriller shines a spotlight on very real issues – including cyber bullying and assisted right-to-die – in a way that it makes it impossible to look away. Emotive and powerful, AFTER YOU DIE is a stunning read that will stay with you long after you’ve read the final page.

AFTER YOU DIE is police procedural crime fiction at its best – an absolute must-read.

AFTER YOU DIE is out now. To buy the book from Amazon click here