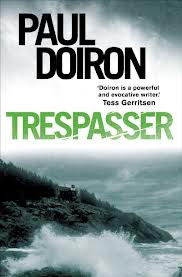 Now, as regular visitors to the CTG blog will know, we’re big fans of Paul Doiron and his Mike Bowditch series. Guest reader Sally Fallon dived in to the latest book to see what was next in store for Mike …

While on patrol on a foggy March evening, game warden Mike Bowditch receives a call for help. A woman has reportedly struck a deer on a lonely coast road. When he arrives on the scene, he finds blood on the road—but both the driver and the deer have vanished. Her body is found the next day, brutalised in a way eerily similar to a case seven years ago, when a jury sentenced Erland Jefferts to life imprisonment for the rape and murder of a college student.

So was Jefferts framed?  When Bowditch begins to investigate he receives a warning from state prosecutors to stop asking questions. but for Bowditch, doing nothing is not an option.  And as he closes in on the truth, he  suddenly discovers how dangerous his opponents are, and how far they will go to prevent him from bringing a killer to justice.”

Although this is the second novel in a series, it is a stand-alone fast-paced, contemporary thriller.  You gradually get drawn into a small but spread out community in the cold state of Maine.   You can feel the beautifully described cold, mud and mist seeping into your bones as the story unfolds and winter gradually thaws.

Warden Mike battles not only with his demanding job, the elements and the range of characters in his community.  He also has to deal with tensions in his current relationship and the ghosts of his relationship with his parents, in particular his father.  It is easy to read but has a surprisingly complex cast of characters, including the possible trespassers of the title.  Mike becomes increasingly embroiled in the case, and he becomes increasingly injured.  The reader becomes desperate for Mike to solve the case before he gets even more damaged.

You can expect the next in the series (Bad Little Falls) to be equally fast paced and detailed.

[With thanks to C&R Crime for our copy of Trespasser]