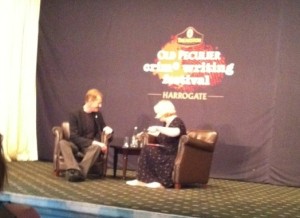 Saturday at Harrogate was again gorgeously sunny. After a fabulous breakfast, I went along (with minimal hangover) to Forensics: Val McDermid in conversation with Sue Black. It was a great session, and especially useful for any budding crime writers. Sue Black demystified the world of forensics with a special focus on identity including DNA sampling and facial reconstruction.

After a quick coffee (my fifth of the day) I went back into the hall for the New Book panel. Expertly chaired by Val McDermid, debut authors Derek B. Miller (Norwegian by Night), Anya Lipska (Where The Devil Can’t Go), Malcolm Mackay (The Necessary Death of Lewis Winter) and Colette McBeth (Precious Thing), discussed their novels, their journey to publication, and what was next for them. From this panel I heard one of my favourite quotes of the festival. It was from Derek B. Miller, who said, “crime writers don’t love crime, they love justice.” Brilliant.

After a quick lunch (sandwiches and crisps on the lawn – no alcohol) I headed to the Library for the C&R Crime party (and a glass of wine!). It was great to catch up with the team from C&R Crime, hear about all the exciting releases they’ve got coming up, and talk to their authors.

By this point it was almost five o’clock, and that meant it was time to get my seat for the Lee Child interview. The hall was packed to bursting, but with my trusty Festival Friend card (which gave the equivalent of ‘speedy boarding’ into the hall) I was able to get a seat three rows from the front. Comedienne Sarah Millican did a superb job with the interview – it was witty, insightful and all round entertaining. The hour-long session went past far too fast, but I was thrilled that I managed to meet Lee Child afterwards (he is my literary hero) and get a photo with him. I was grinning for the rest of the evening.

Anyway, from there it was a mad dash to the License to Thrill dinner. Author David Mark had written a bond themed murder mystery puzzle for the tables to solve during dinner. It was great fun and although the table I was on didn’t win, we had a lot of fun trying.

After a brief rest in the bar (!) it was on to the Late Night Quiz with quizmasters Mark Billingham and Val McDermid. Although the rules clearly stated teams should have six members, we flexed the rules a little and went with seven. It didn’t matter, we reasoned, we were going to lose anyway. But, with plenty of wine (plus the Theakstons beers that we ‘had to’ drink as part of the Name That Beer Round) we discovered that we were not quite as rubbish at the questions as we had thought that we would be. We didn’t win a prize, but we weren’t too far off. So to celebrate we returned to the bar until the early hours.

And then it was Sunday. After a ridiculously late night/early morning I needed a bit of a lie in, so I only made it to one session. But what a great one it was. Charlaine Harris, author of the Sookie Stackhouse series (which became HBO’s True Blood) and a whole bunch of stand-alone novels and other mystery series’, was interviewed by Paul Blezard. An inspiring and highly entertaining hour.

And then it was over.

As I packed up my bags, loaded the car, and said goodbye to all the fabulous people I’d met over the weekend I knew one thing for sure. I’ll definitely be back next year.

4 thoughts on “Notes from Harrogate: Part 2”