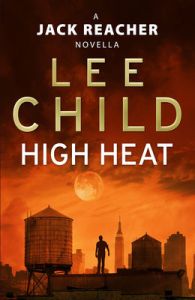 What the blurb says: “July 1977. Jack Reacher is almost seventeen, and he stops in New York on his way from South Korea to visit his brother at West Point. The summer heat is suffocating, fires are raging in the Bronx, the city is bankrupt, and the mad gunman known as Son of Sam is still on the loose. Reacher meets a woman with a problem, and agrees to help her . . . and then the power grid fails and the lights go out, plunging the lawless city that never sleeps into chaos. What does a visiting teenager do in the dark? If that visiting teenager is Jack Reacher, the answer is: plenty.”

High Heat is a Jack Reacher Novella (Kindle Single). It’s 79 pages of fabulous Reacher action, and things get hot in more ways than one!

Reacher is younger, but just as tough (and tall) as readers of the series have come to expect. It’s his first visit to New York and he’s only in town for a short while, but he manages to make the most of it: helping a woman with a problem, identifying a killer on the loose, and even having time for a bit of romance.

If you’re looking for a sizzling summer read to tide you over until the next full Reacher novel comes out at the end of August, you should check it out.

A must for Reacher fans and all those who love a great action thriller.