The holiday season is fast approaching, and along with it the search for the perfect gift. But there’s no need to panic. Hardback, paperback, audiobook or eBook, whatever your preferred format, books make a fabulous gift.

So, if you’re looking for a few ideas for the crime thriller lovers in your life (or you’re dropping a few hints about what you’d like in your Christmas stocking) here’s a recap of some of my favourite reads from 2013 …

There have been some cracking psychological thrillers out this year, a few of my favourites are:

From the very first page, no, the very first paragraph, this story had me hooked. I don’t know if it was the terrifying premise – three women imprisoned in a cellar by a man they thought that they could trust; the unwavering loyalty to her friend Jennifer that the protagonist, Sarah, maintains despite the danger that in puts her in; or the three women’s determination, against all odds and all that had happened to them, to succeed in their quest for justice and uncover the shocking truth. Whatever it was, I just couldn’t put it down.

A chilling, page-turner of a psychological thriller with one hell of a twist at the end: a real must-read for all fans of the genre.

You can check out my full review here http://crimethrillergirl.com/2013/09/04/the-never-list-by-koethi-zan/

Rush of Blood by Mark Billingham

A cross between a police procedural and a psychological thriller, this high-tension, fast paced, character driven story is masterfully plotted and flawlessly told. It’ll also make you think twice about striking up a conversation with the people sitting round the pool or beside you on the beach next time you’re on holiday! Fabulous.

You can check out my full review here http://crimethrillergirl.com/2013/09/12/rush-of-blood-by-mark-billingham/ 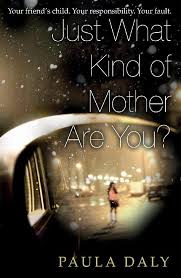 Just What Kind of Mother Are You? by Paula Daly

“She’s gone and it’s your fault. You were supposed to be watching your best friend’s 13-year-old daughter, and now she’s missing.”

Lisa’s life is beyond hectic. With her family, her job at the animal shelter, and the demands of her friends she rarely has a minute to herself. It’s easy to empathize with her, and it’s easy to understand how she might overlook the odd detail. An odd detail that leads to her worst nightmare coming true.

I finished this book in 24 hours, unable to put it down until it was finished. It also made me want to go and adopt another animal from the local shelter. If you (or the person you’re buying a gift for) enjoy fast-paced psychological thrillers with an emotional kick, then this is for you.

You can check out my full review here http://crimethrillergirl.com/2013/05/02/review-just-what-kind-of-mother-are-you-by-paula-daly/