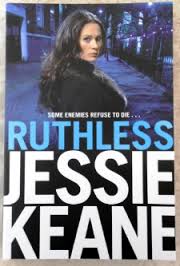 What the blurb says: “After fighting her way out of East London’s criminal underworld, Annie Carter’s life appears to be perfect. She has all the trappings of a wealthy and successful existence. And her longstanding rivals the Delaneys are dead, out of her life for good …

But behind the gilded surface, Annie’s life is descending into chaos. Her marriage is in tatters, her relationship with her daughter is fraught and there are whispers on the streets of London; are the Delaney twins really dead? Perhaps Annie should have demanded to see their bodies lying on a slab in the morgue …

Once again Annie is being chased by those who want her dead. But this time, the stakes are even higher and her enemies are even more determined …”

This is the first book by Jessie Keane that I’ve read, but it most certainly won’t be the last. Tightly plotted, with a full cast of wonderfully larger-than-life characters, this novel had me gripped from the very first page.

The main protagonist, Annie Carter, seems to those around her a real woman-on-top, but beneath her glamorous appearance and no-nonsense business savvy, she’s in emotional turmoil. Still, she’s determined to pull her life back on track.

Then someone tries to abduct her daughter, blow up her car, and break into her home. Worse still, their description seems to match that of one of the Delaney twins, Annie’s arch enemies, who she believed to be long dead. Sending her daughter into hiding, Annie puts her personal problems aside and partners up with her ex-husband, Max Carter, and her youngest step-son, Mafia boss, Alberto Barolli, to find out who is behind the attacks, and whether the Delaney twins really died all those years ago.

The novel takes the reader on a journey from London, to New York, and across to rural Ireland. What I especially loved about this story was the way multiple story strands were woven together: a coming-of-age story for Annie’s daughter, Layla, and an explosive battle of wills (and sexual tension) for Annie as she tries to keep an uneasy truce with her ex-husband; all set within a deadly game of cat and mouse with a determined killer driven by revenge.

[With thanks to Pan for my review copy of RUTHLESS]