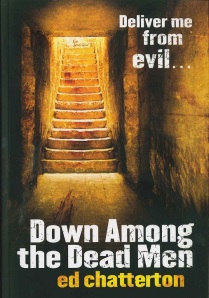 Down Among the Dead Men cover image

What the blurb says: “At first glance, to newly-promoted DCI Frank Keane, the horrifically bloody crime scene in suburban Liverpool looks like a straightforward murder-suicide – the husband kills the wife and then himself. Frank and the rest of the Major Incident Team have seen too many cases like it before. But what of their missing teenage son, Nicky? Is he their prime suspect or the third victim?

For script-writer Dean Quinn, the killings are a potential disaster. The film he is working on is everything to him and with new London money and a rising American actor lighting up the set, his vision is almost complete. He’ll do anything to protect it.

Frank knows that time is running out to find the boy. But all too soon the case starts unravelling into one that will test Keane to the limit – and haunt him to his dying day.”

This is the second book in Ed Chatterton’s DCI Frank Keane crime series.

As with the first book, Down Among the Dead Men continues the dark, gritty tone. As unsettlingly atmospheric as the claustrophobic-inducing old tunnel system they’re using as a location for Dean Quinn’s film, this story gives more than a few heart-pounding moments.

First part of the book is set in Liverpool and has all the elements you’d expect from a police procedural. I think this was my favourite part of the book as there’s a high element of mystery, and as the actions and behaviours of each character associated with the murdered couple are revealed, the relationships between them are shown to be far from simple. I loved the complexity, the intrigue, and trying to guess who was responsible for the sinister activities surrounding the ill-fated movie.

The second part of the book ups the pace and becomes more thriller-like as the action shifts to follow Keane’s pursuit of the killer in LA. Fast-paced and dynamic, the chase pulls you along at a relentless speed.

If you’re a fan of gritty, atmospheric crime thrillers, this could be a series well worth checking out.

Ed Chatterton stopped by the CTG blog a few weeks ago. You can read the interview here.