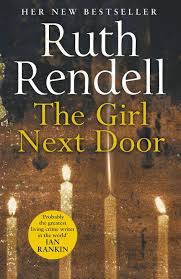 The Girl Next Door cover image

What the blurb says: “When the bones of two severed hands are discovered in a box, an investigation into a long buried crime of passion begins. And a group of friends, who played together as children, begin to question their past.

‘For Woody, anger was cold. Cold and slow. But once it had started it mounted gradually and he could think of nothing else. He knew he couldn’t stay alive while those two were alive. Instead of sleeping, he lay awake in the dark and saw those hands. Anita’s narrow white hand with the long nails painted pastel pink, the man’s brown hand equally shapely, the fingers slightly splayed.’

Before the advent of the Second World War, beneath the green meadows of Loughton, Essex, a dark network of tunnels has been dug. A group of children discover them. They play there. It becomes their secret place. Seventy years on, the world has changed. Developers have altered the rural landscape. Friends from a half-remembered world have married, died, grown sick, moved on or disappeared. Work on a new house called Warlock uncovers a grisly secret, buried a lifetime ago, and a weary detective, more preoccupied with current crimes, must investigate a possible case of murder.”

Ruth Rendell is one of the UKs most successful crime writers. Her first novel, From Doon With Death, was published in 1964, and since then her readers have grown steadily with every new book. In 1996 she was awarded the CBE and in 1997 became a Life Peer. In 2013 she was awarded the Crime Writers’ Association Cartier Diamond Dagger for sustained excellence in crime writing.

Published this week, her latest book, The Girl Next Door, begins with the discovery of a crime: a pair of severed hands clasped together – one male, one female – are found in a tin box beneath a new build. The discovery leads to a group of childhood friends who’d drifted apart reuniting. It also sets off a course of events that lead to the rekindling of lost love and forgotten friendships for some, and to death for others.

This gentle-paced story has a large cast of characters, the majority of whom are over the age of seventy. It’s an unusual crime book in that although it starts with the crime and ends with the crime, the solving of the crime is almost incidental, with the main focus being on the interconnections between the group of childhood friends, now in their twilight years, and the adults who influenced their lives (not always in a good way). It shows how attitudes, especially to sex and marriage, have changed during their lifetime, and how the things hidden away in your past can shape your present and come back to haunt you when you least expect it.

The reader is aware of the murder, and the identity of the murderer, from the outset. I found that even though the overworked police and the people in the community seemed generally unconcerned about uncovering the killer (if they were still alive) I kept turning the pages because I, as the reader, complicit in my knowledge of what had happened and who had done it, wanted to see the killer brought to justice.

One thought on “CTG Reviews: The Girl Next Door by Ruth Rendell”