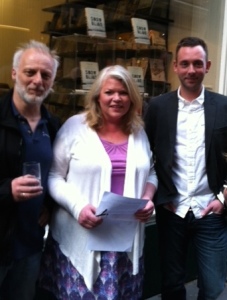 Last night I headed to the fabulous Goldsboro Books to the launch of Ragnar Jónasson’s brilliant crime novel SNOWBLIND.

Ragnar is an established author in Iceland and SNOWBLIND is the first of his Dark Iceland crime series to be published in the UK (by wonderful new publisher Orenda Books).

It was a fabulous evening – I got my hands on one of the gorgeous hardback copies (available exclusively from Goldsboro Books) and there was even an amazing SNOWBLIND-themed cake!

I’ll be reviewing SNOWBLIND as part of Ragnar’s official blog tour on the 22nd May but, in the meantime, here’s the blurb: “Siglufjörður: an idyllically quiet fishing village in Northern Iceland, where no one locks their doors – accessible only via a small mountain tunnel. Ari Thór Arason: a rookie policeman on his first posting, far from his girlfriend in Reykjavik – with a past that he’s unable to leave behind. When a young woman is found lying half-naked in the snow, bleeding and unconscious, and a highly esteemed, elderly writer falls to his death in the local theatre, Ari is dragged straight into the heart of a community where he can trust no one, and secrets and lies are a way of life. An avalanche and unremitting snowstorms close the mountain pass, and the 24-hour darkness threatens to push Ari over the edge, as curtains begin to twitch, and his investigation becomes increasingly complex, chilling and personal. Past plays tag with the present and the claustrophobic tension mounts, while Ari is thrust ever deeper into his own darkness – blinded by snow, and with a killer on the loose.” 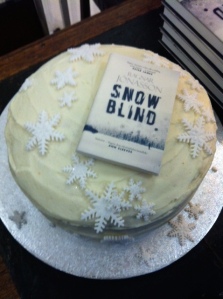 To find out more about Snowblind pop over to the Orenda Books website here http://orendabooks.co.uk/ragnar-jonasson/

and be sure to follow @ragnarjo (Ragnar) @OrendaBooks (Orenda Books) and @graskeggur (Quentin) on Twitter for all their up to date news.

2 thoughts on “The launch party everyone’s talking about: Snowblind by Ragnar Jónasson”