Today I’m delighted to be joined on the CTG blog by thriller writer Simon Kernick. Known for his fast-paced, action-packed thrillers, Simon spills a few of his writing secrets as he tells us how he goes about creating his best-selling books …

Your latest novel THE FINAL MINUTE is out this month, can you tell us a bit about it?

The Final Minute, centres round Matt Barron, a man with severe amnesia who keeps have a recurring, and very vivid, dream in which he is in a house looking down at two dead women. This leads him to think that he may have killed them. As the book starts, he’s living with his sister in Wales but when a pair of menacing strangers turn up out of the blue with questions for Matt, he realizes that somewhere in his unconscious he possesses a piece of information that is extremely valuable for some very dangerous people. He’s soon on the run, being chased by people at every turn, including the police, and enlists the help of a hardnosed private detective Tina Boyd, to help him find out his true identity and what the information he possesses is before he’s either caught or killed.

You’re well known for writing super pacey thrillers like THE FINAL MINUTE. What’s your writing process – do you plan the stories first, or do you jump right in?

I’m very much a planner. I get my idea, then produce a chapter by chapter synopsis, and only when I’m absolutely sure I know where the book is going and how it’s going to end, do I finally start the writing process. 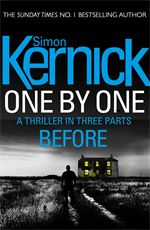 You’ve also recently published a three-part novella ONE BY ONE about a group of school-friends coming together on a remote island twenty-one years after one of their friends was found dead. What attracted you about releasing a story in episodes and did the different format change your writing process?

I had a story idea two years ago that I really liked but wasn’t big enough to fit it in a book and so I used it as a novella. Since I’ve been a fan of serials since childhood I thought it would be an interesting idea to make the novella 3 parts, with parts 1 and 2 ending on real cliffhangers.

What was it that drew you to writing thrillers?

I’ve written stories of one sort or another right back from the age of 5, and I’ve always been a fan of reading thrillers so it seemed like a natural progression to try my hand at writing one.

For those aspiring to write a thriller, what’s your top tip for writing a great story?

Keep the story moving. Always. Let no word be wasted. People aren’t interested in padding when they’re reading a thriller. 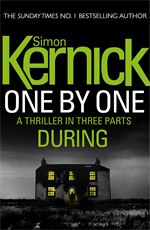 And finally, what does the rest of the year have in store for you?

I’m writing a new thriller which needs to be finished by the end of September, then I’m going to have a nice holiday. Then it’ll be onto planning the next one. There’s no rest for the wicked.

A massive thank you to best-selling thriller writer Simon Kernick for dropping by the CTG blog today.

To find out more about Simon and his books you can hop on over to his website at www.simonkernick.com/books/

His latest book is THE FINAL MINUTE – here’s the blurb: “It’s night and I’m in a strange house. The lights are on, and I’m standing outside a half-open door. Feeling a terrible sense of foreboding, I walk slowly inside. And then I see her. A woman lying sprawled across a huge double bed. She’s dead. There’s blood everywhere. And the most terrifying thing is that I think her killer might be me …

After a traumatic car accident wipes out his memory, Matt Barron retreats to his sister’s house in Wales to begin his slow recovery. But something’s wrong. He keeps having a recurring dream of being in a house with a group of dead bodies and a bloody knife in his hand, and he’s beginning to have real doubts that he is who his sister says he is. Then one night, the past comes calling in the most terrifying way imaginable and Matt is forced to flee for his life. He needs to find out who he is, whatever the cost, and there’s only one person who can help: ex Met cop, turn private detective, Tina Boyd. But Matt’s a hunted man and, as Tina digs into his background, she suddenly finds herself in the firing line. She needs to find out the truth. And fast.”

Also, be sure to check out his three-part novella ONE BY ONE – here’s the blurb: “Seven ex-school friends have been brought together on a remote island. They haven’t all been in contact since a fateful night twenty-one years ago, when their friend Rachel Skinner was found dead. The man arrested for her murder has now been acquitted, and the seven friends fear for their lives. But are they hiding from the right person? Or have they fallen into a deadly trap?”