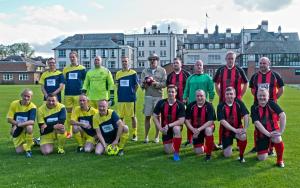 One of the great new additions to the festival programme this year was the football match. At 6.30pm on Saturday evening two teams of brave crime writers lined up to be counted in a passionate and thrilling match for the Harrogate Crime Writers North vs South Challenge Cup.

The teams, pictured here at the start of the match with Referee Mark Billingham, were: 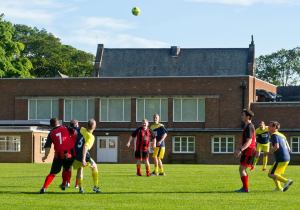 With a large crowd of spectators assembled to watch them the match kicked off and right from the start the competition was fierce. The North, with great form from their convincing win at the Bloody Scotland Crime Writers Football Match last year, started strong, but the South were determined to give them a challenge and at first possession seemed equally held.

Then the first goal came – from Luca Veste for the North – and from then on the goals from the North kept on coming. 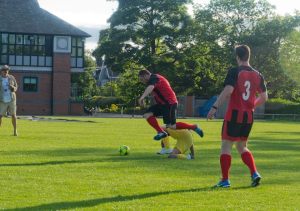 A short time later it seemed like the South might shorten the gap with Tim Weaver putting the ball in the back of the net. But the goal was disallowed because it occurred after Craig Robertson saved a goal from Tom Witcomb – whose momentum took him illegally (but accidentally) into the box where he illegally (accidentally) flattened Craig – both players were still on the ground when the ball went in the net). Despite some player protests, Referee Mark Billingham stood firm in his decision to disallow the illegal goal, and the teams played on.

The action was fast and the teams were cheered on as they chased the ball up and down the field with vigor and determination right to the final whistle. Although the South played valiantly to the end, this match was all about the North – with the final score standing at 6-0 to the North. The goals scored by Luca Veste (1), Howard Linskey (2) and Col Bury (3). Craig Robertson saved two penalties.

The match was a real crowd pleaser, with the enthusiastic crowd cheering on the teams the whole way through. But this sporting event didn’t pass without the sheading of blood, sweat and (probably) tears. Confirmed injuries included a fractured wrist (Graeme Cameron) and a fractured ankle (Luca Veste) – and it’s worth noting the grit of these players as they played on with their injuries, Luca still managing to hit the bar and post after his. 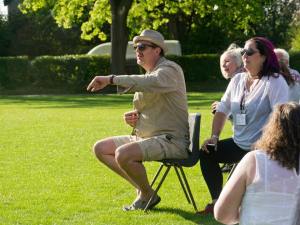 As the triumphant North held high the Harrogate Crime Writers North vs South Challenge Cup later that evening, talk was already turning to the 2016 rematch, and the rigorous training schedules that the players would be putting in place in preparation.

Massive kudos to all who played. It was a fabulous event and one that I’ll be super excited to see return in 2016!