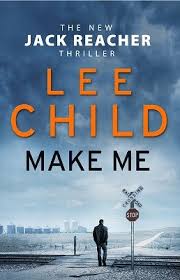 What the blurb says: “Jack Reacher has no place to go, and all the time in the world to get there, so a remote railroad stop on the prairie with the curious name of Mother’s Rest seems perfect for an aimless one-day stopover. He expects to find a lonely pioneer tombstone in a sea of nearly-ripe wheat … but instead there is a woman waiting for a missing colleague, a cryptic note about two hundred deaths, and a small town full of silent, watchful people. Reacher’s one-day stopover becomes an open-ended quest … into the heart of darkness.”

As you’ll know if you’re a regular follower of the CTG blog, I’m a big Jack Reacher fan. Make Me is the twentieth book in this iconic series and so what can fans of the series (and readers new to it) expect from this latest book …

Well, it’s classic Reacher, as you’d expect. He’s picked Mother’s Rest as a place to visit because he’s curious about the name of the town and in finding out the history behind it. But Mother’s Rest has far greater secrets hidden within it, as Reacher is soon to discover.

On the railroad platform he meets Ex-FBI Special Agent, Michelle Chang. She’s looking for her colleague – a fellow investigator who’s gone missing while looking into a hobby case. Her data has led her to Mother’s Rest, but the trail has gone cold.

While the residents of Mother’s Rest seem initially friendly, Reacher starts to suspect that he’s being followed and checked up on. When he tests his theory he’s proved right. Suspicious, he decides to help Michelle Chang find her colleague.

With little more to go on than a scrap of paper with a phone number and a reference to two hundred deaths, Reacher and Chang dig deeper to try to find Chang’s colleague and the client that got him interested in the case. And as they get closer to the truth, and the people that want it to stay hidden, the stakes and the danger ramps up higher and higher.

As ever, this latest book in the series is a thrilling read; rapid-paced and packed with action it follows Chang and Reacher’s investigation as they hunt for the truth and overcome the (many) challenges in their way.

Fans of the series will, I think, find the Chang and Reacher relationship an interesting one. Reacher, ever the loner, seems to develop a stronger bond with Chang than with some of the other women who’ve come into (and out of) his life in the past. It’s a physical thing, sure, but he seems to be having thoughts about a future for their relationship after the immediate puzzle is solved and the danger past. Is Reacher ready to settle down? It’s an interesting question – but you’ll have to read the book to see how things turn out [no spoilers here – sorry!].

MAKE ME is out in paperback today. It’s an absolute must-read for Jack Reacher fans, and for fans of the thriller genre, from a writer at the very top of their game.

To find out more about Lee Child and the Jack Reacher series hop over to www.leechild.com and follow Team Reacher on Twitter @LeeChildReacher