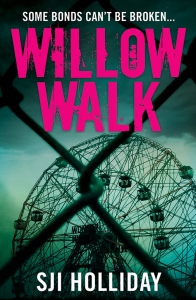 What the blurb says: “When the past catches up, do you run and hide or stand and fight? When a woman is brutally attacked by an escaped inmate from a nearby psychiatric hospital, Sergeant Davie Gray must track him down before he strikes again. But Gray is already facing a series of deaths connected to legal highs and a local fairground, as well as dealing with his girlfriend Marie’s increasingly bizarre behaviour. As Gray investigates the crimes, he comes to realize that there has to be a link between Marie and the man on the run. It’s the only thing that makes any sense. But he also knows that if he confronts her with the truth, he risks losing everything. As a terrified Marie is pulled back into a violent past she thought she’d escaped, she makes a life-changing decision. And when events come to a head at a house party on Willow Walk, can Gray piece together the puzzle in time to stop the sleepy town of Banktoun being rocked by tragedy once again?”

Having really enjoyed SJI Holliday’s debut novel – BLACK WOOD – I was delighted to get an early read of the second book in the Banktoun trilogy. Set in a small town community in Scotland where everyone knows each other’s business and secrets are deeply held, Sergeant David Gray is investigating a series of deaths linked to legal highs, while also trying to work out what is going wrong in his relationship with girlfriend, Marie.

Sergeant Gray is a fantastic character. In WILLOW WALK we find out more about his personal life, and about his relationship with Marie. When she becomes increasingly distant and her behaviour erratic, he struggles with what to do to makes things better. As he joins the search for the missing psychiatric patient, Sergeant Gray starts to see connections between the different areas he’s grabbling with – professionally and personally. As he follows the evidence, and begins to piece together the truth, he realizes that this case might be a lot closer to home than any other before.

A twisty, turning police procedural with a strong psychological twist, the tension ramps up page by page from the outset. Tackling some controversial issues, this is a gritty tale of obsession, revenge and escape.

WILLOW WALK is out in paperback today. Click to buy it here from Waterstones or from Amazon here

3 thoughts on “CTG Reviews: WILLOW WALK by SJI Holliday – out today in paperback!”