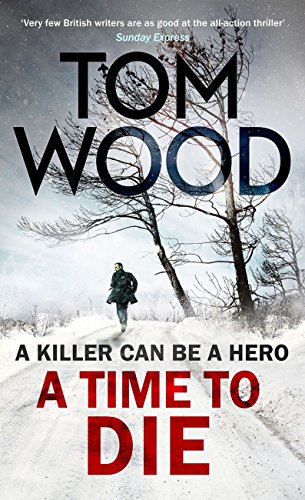 Here’s the blurb: “A killer can be a hero. If the assassin known only as ‘Victor’ once had a moral compass, it is long since buried, along with his many victims. But some men are so evil they must die for reasons other than just money. Like Milan Rados, a former war criminal who has escaped trial to become a formidable power. Tracking down and killing this brutal man will win Victor a reprieve for his own recent crimes on British soil. But Victor isn’t the only one who wants Rados dead. One woman will do anything to see Rados’ blood spilled on the snow of Eastern Europe. Now Victor has an unlikely ally – but an army stands between them and justice.”

I’m a big fan of the Victor the Assassin books and A TIME TO DIE is another great addition to the series.

Victor is the ultimate ‘lone wolf’ – he’s known as Victor but has many aliases, he changes his appearance regularly to put anyone on his tail off track, and he has no family or friends. He doesn’t trust anyone, and regards all he meets as a potential threat. He’s cold, calculating and by rights should be very difficult to like. Yet as a reader I find him strangely likable. Perhaps it’s because he’s so up front about how he is – there’s no pretence, he says what he thinks even when it’s not what someone wants to hear (for example, if they ask if he’s going to kill them and the answer is yes!). That said, he does some dreadful things, so I don’t think I’d actually want to meet him!

But reading about him is fantastic.

Tom Wood’s writing has a fabulously cinematic quality to it and in A TIME TO DIE Victor is both hunter and prey. His assignment is more dangerous than is usual even for him. He has to gain the trust of the elusive war criminal Milan Rados – a man with no conscious and a sickening love of the brutal and macabre – in order to get close enough to kill him.

But hard as that is, it’s complicated even further when Victor learns he has a price on his head – a throw back from a previous job – and he becomes the target of other professional assassins.

With some stunning action-packed set pieces, and a pace that whips along from beginning to end leaving you breathless, A TIME TO DIE is a must-read for thriller fans.

You can buy A TIME TO DIE from Amazon here