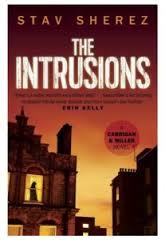 Today I’m delighted to be hosting a stop on the #TheIntrusions Blog Tour and am joined by fabulous crime writer Stav Sherez.

Stav is a fan of using prologues in his novels (as am I) and he’s kindly agreed to talk about his process for prologue writing and how the prologue in his latest book – THE INTRUSIONS – came about.

Every crime novel has a beginning, middle and end – but where, exactly, do you begin? The question of whether to prologue or not is one of the most frequently asked in creative writing classes. The answer is often hotly debated but, like everything else in fiction, there is no right or wrong way, only what suits the book in question.

I’ve seen so many creative writing tips and lists that tell you never to prologue. They claim it slows the action down, prevents readers from immediately engaging with the narrative, and is unnecessary.

I disagree with this. I love prologues. I love to read them and I love to write them. All my novels have featured them. And – despite being beginnings – they’re nearly always the last sections to be written.

There’s something about the very nature of a prologue that is perfect for creating mystery. The prologue, rather than putting off the action, plunges you straight into the story, not knowing if it’s the beginning, middle or end of the narrative. Prologues create a frame and that’s perhaps one of the main reasons I like them, the way they stand outside the main action – the prologue can chart events that take place days or weeks or even years before the central narrative or they can be enigmatic flash-forwards straight into the heart of the book. As a reader, my favourite type of prologues are the ones where I have no idea how they relate to the plot until three-quarters of the way through – it all clicks into place.

But I never get it right the first time. Or the second. Or the third. Or the twenty-third. Every novel I’ve ever written has featured several very different prologues before I settled on the final one. I never know how to start until I have reached the end.

The Intrusions proved the hardest of my novels to write a prologue for. I wrote what I thought was a decent prologue after I’d finished the first draft. It was set 30 years before the action of the novel and in another country – but it didn’t fit. It knocked the main storyline off-kilter. I cut it and rethought the beginning. My second prologue was 10,000 words and consisted of only one sentence! The idea was to start the book with a long tracking shot the way Orson Welles does in Touch of Evil. The prologue followed a relay of CCTV cameras across London on a Friday night, picking up the main characters, following them, dropping them, and roving across the capital. I’m kind of glad I didn’t stick with that one…

The next prologue was set during one of the character’s childhood years. It was a family dinner scene, static and tense and a world away from the previous prologue. I was quite happy with it but one of the benefits of doing many drafts is you get to read over the novel a hundred times or more and anything that doesn’t fit or is boring becomes obvious very quickly – and the new prologue was just too far removed from the action and themes of the novel.

I tried again. I started from scratch and this time the prologue, though it takes place some time before the action of the book, supplied part of the puzzle that Carrigan and Miller would later have to solve. It also introduced some of the themes I wanted to explore in the novel and, finally, it felt exciting, plunging the reader directly into peril.

It took me two and a half years of writing different prologues before I found the one which suited the book but, sometimes, you need to write all the wrong things before you can get it right.

A huge thank you to Stav Sherez for popping over to the CTG blog today and talking about prologues.

THE INTRUSIONS is out now. Here’s what the blurb says: “When a distressed young woman arrives at the station claiming her friend has been abducted, and that the man threatened to come back and ‘claim her next’, Detectives Carrigan and Miller are thrust into a terrifying new world of stalking and obsession.

Taking them from a Bayswater hostel, where backpackers and foreign students share dorms and failing dreams, to the emerging threat of online intimidation, hacking, and control, The Intrusions explores disturbing contemporary themes with all the skill and dark psychology that Stav Sherez’s work has been so acclaimed for.

Under scrutiny themselves, and with old foes and enmities resurfacing, how long will Carrigan and Miller have to find out the truth behind what these two woman have been subjected to?”

THE INTRUSIONS is out now on Kindle and the 2 February in trade paperback. You can order it from Amazon here 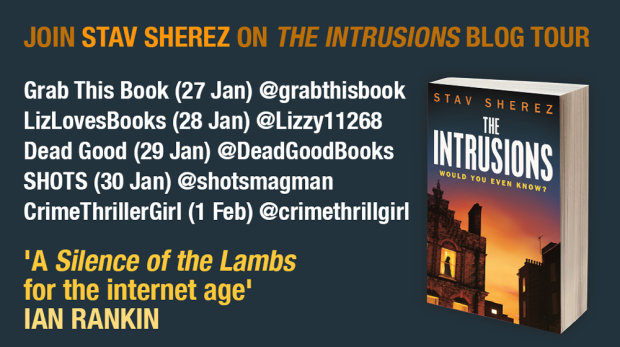