Today I’m delighted to be a part of Mark Hill’s blog tour for the debut that’s taking the UK by storm – Two O’Clock Boy.

What the blurb says:

Thirty years ago, the Longacre Children’s Home stood on a London street where once-grand Victorian homes lay derelict. There its children lived in terror of Gordon Tallis, the home’s manager.

Then Connor Laird arrived: a frighteningly intense boy who quickly became Tallis’ favourite criminal helper. Soon after, destruction befell the Longacre, and the facts of that night have lain buried . . . until today.

Now, a mysterious figure, the Two O’Clock Boy, is killing all who grew up there, one by one. DI Ray Drake will do whatever it take to stop the murders – but he will go even further to cover up the truth.”

From the chilling prologue to the nail-bitingly intense final pages this London-set police procedural had me hooked.

Longacre Children’s Home burnt to the ground thirty years ago, but the horrors that occurred during the time it was open still haunt those that grew up there and the adults that had dealings with the place. Most of them just want to forget, but someone won’t leave the past behind – they are picking off the people who grew up at Longacre – and dragging back up all the secrets that have been burried for thirty years.

Enter newly promoted DS Flick Crowley and her mentor and boss DI Raymond Drake. Two dynamic detectives determined to get to the truth behind the murders – and also two people with connections to the Longacre themselves. As their professional and personal lives colide, and they try to piece together the evidence as the body count rises, can they work together to find the killer or will the memories and questions the investigation raises force them apart?

I loved this story with its strong procedural detail and gritty, authentic feel to the narrative. Flick and Ray are two great new police characters and, as the investigation puts increasing pressure on their relationship, I was fascinated to find out how things would play out.

The story twists and turns, ratcheting up the tension with every chapter as one-by-one the past residents of the Longacre are singled out by the mysterious Two O’Clock Boy. As more secrets get exposed, and Flick and Ray get ever closer to the killer, the pace accelerates to full throttle, propelling you into the edge-of-the-seat show down and shocking revelations at the climax.

The Two O’Clock Boy is a masterful debut and a real must-read for lovers of police procedurals and detective stories – I recommend you add it to your ‘to read’ stack immediately!!

You can find out more about Mark Hill by popping over to his website at www.markhillauthor.com and following him on Twitter @markhillwriter 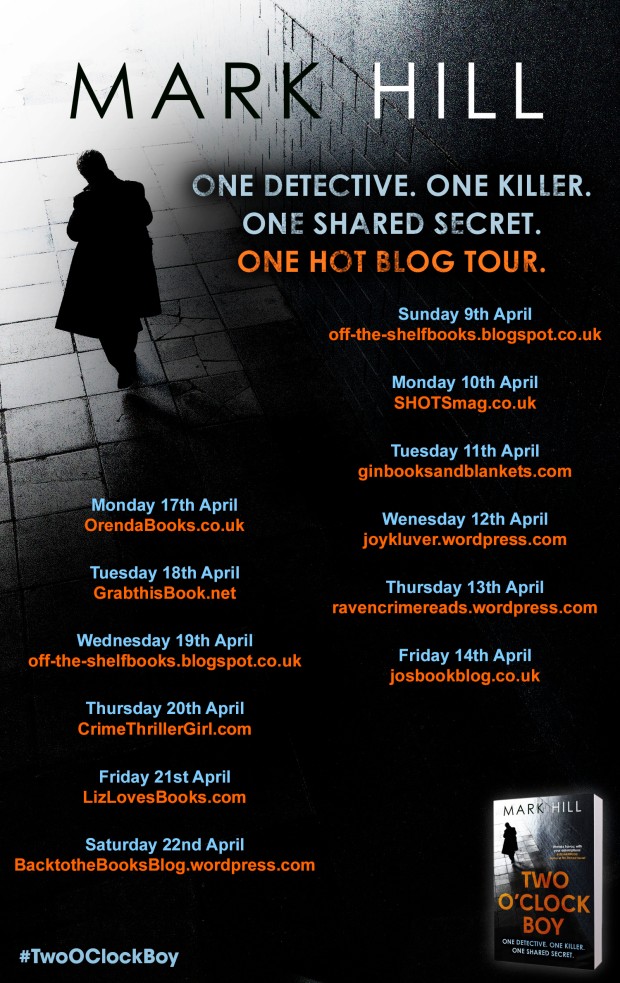