Last week we had the official DEEP DOWN DEAD launch party at the fabulous Waterstones Piccadilly bookstore in London. I was really nervous beforehand – what if no one came? What if I said something stupid? What if I was too nervous to say anything at all?

I shouldn’t have worried – so many lovely people came along to celebrate the launch, and we packed out the room until there was standing room only – amazing! Also, I had my marvelous publisher Karen Sullivan of Orenda Books at the helm, my brilliant agent Oli Munson providing moral support, and the awesome crime writer Martyn Waites to interview me. They made it fun (for me, and hopefully everyone else!), and soon after Martyn asked me the first question (possibly something to do with tasers!) I forgot to be nervous and had fun.

There was wine, and beer, and bourbon, and cake. There was cornbread (my most favourite food!) and peanut butter chocolate cookies (big thank you to Joy Kluver for baking them) plus Reeces Pieces and Hersheys Kisses. And country music!

Me and Martyn dressed appropriately for the occasion – he wore a gorgeous red western shirt and I wore my favourite red with white flowers cowboy boots. I wore a sparkly black dress too, although in some pictures it kind of looks like I’m not wearing a skirt (note to self – wear a longer dress next time!).

A huge thank you to everyone who came along to celebrate the launch of DEEP DOWN DEAD, who bought books and let me sign them, and who took photos and live tweeted, and who came over and said hello. And to those who couldn’t make it and sent messages and tweeted and RTed the event.

Thank you – you made the night special. 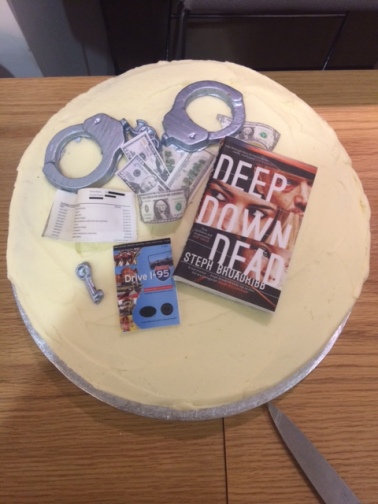 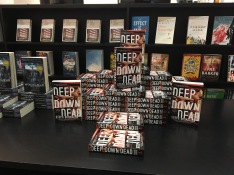 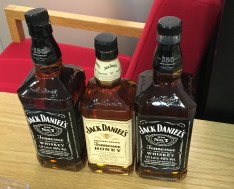 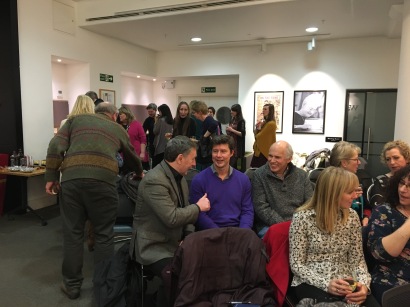 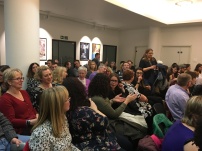 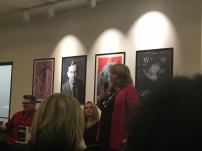 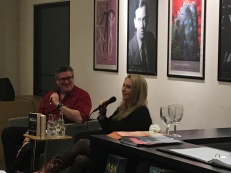 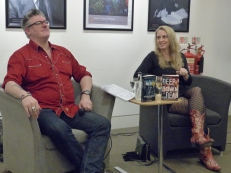 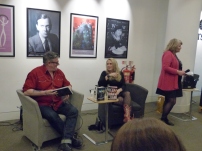 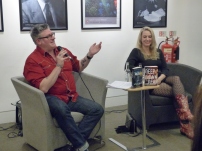 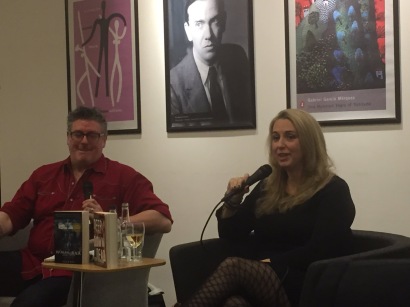 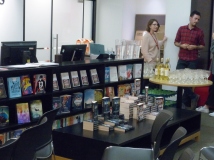 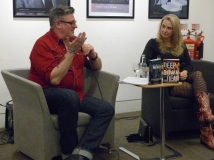 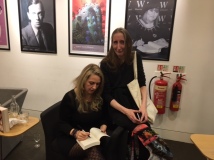 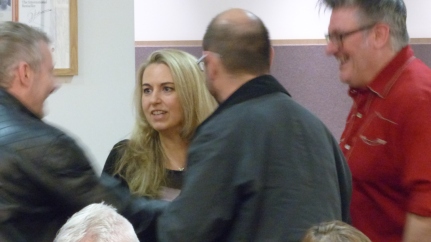 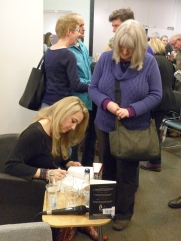 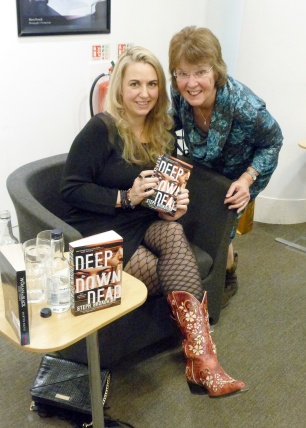 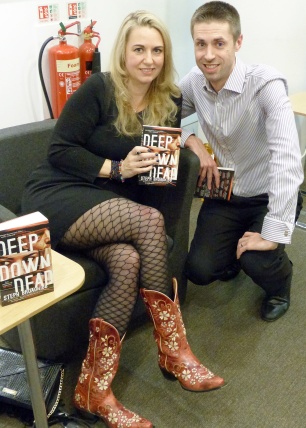 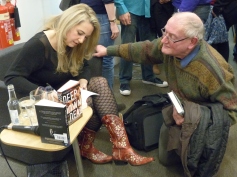 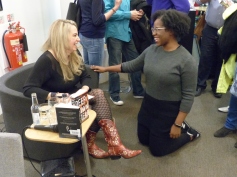 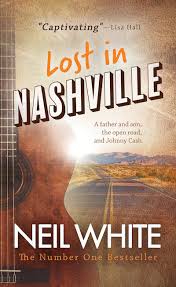 Now, as you know I’m a big country music fan. And today I’m super excited to be reviewing a book that’s more country than crime … LOST IN NASHVILLE by Neil White.

What the blurb says: “James Gray is a lawyer and his life is a success. Or, at least he thinks it is, but it has something missing: a bond with his father, Bruce. Bruce Gray is old, tired and estranged from his family. He spends his time drinking and drifting in the small seaside town in England that James once called home. James decides to take Bruce on a road trip, to try to connect with his father through the one thing that has always united them: a love for Johnny Cash and his music. Together, they travel through Johnny Cash’s life; where he grew up, the places he sang about – a journey of discovery about Johnny, the South, and each other.”

Readers who are fond of fast-paced, gritty crime ficton will be no stranger to crime writer Neil White’s best-selling crime novels. He’s known for great characters and twisty-turny action packed stories with a gritty authenticity, but there’s something else dear to his heart – and that’s country music.

And his love and knowledge of country, especially the work and life of Johnny Cash, come through loud and clear in his latest, and first non-crime, book LOST IN NASHVILLE.

The story is one hell of a read – part road trip, part exploration of Johnny Cash’s life – the man and the music – and part a journey of self-discovery for the two main characters, James Gray and his father, Bruce.

It’s a road trip where the journey is measured in far more than the miles covered. Where life choices – the good and the bad – are examined. And relationships are re-discovered and re-formed.

As a country fan I found the study of Johnny Cash’s life, the descriptions of the places visited by the characters and the history hidden within them really fascinating. That, partnered with an emotive story of fractured relationships, regret and redemption as James and Bruce try to connect as father and son, as adults and as flawed human beings, makes this an unputdownable read.

As heart-breaking and heart-warming as the very best country music – LOST IN NASHVILLE will have you laugh, cry and sing along!

LOST IN NASHVILLE is out today! Buy it from Amazon here

And to read more about the ‘making of’ LOST IN NASHVILLE be sure to check out this blog post by Neil http://www.neilwhite.net/single-post/2016/07/18/Ive-got-more-than-a-life-of-crime 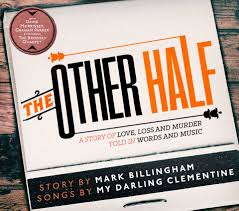 The Other Half album cover

Today is the release day of something rather wonderful. Best selling crime writer Mark Billingham and award-winning country duo My Darling Clementine have come together to collaborate on a fabulous album – The Other Half.

Here’s what the blurb says: “With her best years seemingly behind her, a former Las Vegas showgirl works double shifts in a rundown Memphis bar. Alone and estranged from her daughter, Marcia lives life vicariously through her customers and the everyday tragedies of people falling in and out of love. These are moving tales of grief and heartbreak, lust, murder and domestic horror. Serving beer and burgers as these very different stories unfold, Marcia reflects on her single doomed shot at happiness. Then one day, she receives a phone call that changes everything …”

I was super lucky earlier this week to go to the launch event for the album and got to hear some of the story performed live. It’s breathtakingly good – great story, fascinating characters, amazing music and vocals – and transports you right there to the bar in downtown Memphis where Marcia works.

It’s a perfect pairing of spoken word and songs woven together to tell a hauntingly compelling story of heartbreak, horror and hope. 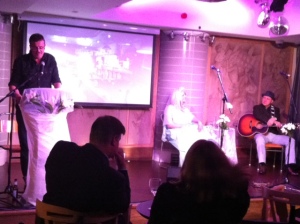 The album is available on CD, Audiobook and limited edition vinyl. On it Mark Billingham and My Darling Clementine are joined by special guest performances by brilliant actor David Morrissey, singer-songwriter legend Graham Parker, and the Brodsky Quartet.

To listen for yourself, hop on over to The Other Half website to hear a clip http://www.theotherhalfshow.com/content/the-album

And, you can watch them perform The Other Half live on their UK tour (I’ve already booked my ticket!) – for dates and venues head over to http://www.theotherhalfshow.com

To find out more about Mark Billingham hop over to http://www.markbillingham.com and follow him on Twitter @MarkBillingham

To find out more about My Darling Clementine pop over to http://www.mydarlingclementinemusic.co.uk and follow them on Twitter @My_Darling_Clem

[I bought my own copy of The Other Half]