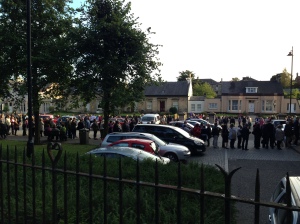 Now queuing might normally be viewed as an annoying if not frustrating aspect of festival going, but not at Bloody Scotland. The buzz in the queue for the sold out sessions at the Albert Halls was tremendous, and it was great to strike up conversations with fellow fans of crime fiction and find out what their highlights of the festival had been and which sessions and authors they were looking forward to seeing. In the process I managed to add a few more authors to my ever growing ‘must read’ list.

As for the sessions I attended, the highlights of my day were:

The Fresh Blood panel. Chaired by Michael Malone, the panel of Matt Bendoris, Lisa Ballantyne and Malcolm Mackay talked about their debut novels and their experiences of getting to publication. They talked of the challenges (and need for dogged determination) when juggling home, work and writing, with Matt Bendoris admitting that he wrote his debut (and second novel) on his Blackberry while standing on a packed commuter train en-route (and back) to his day job!

Thrilling Tales and Psychological Twists saw Professor David Wilson in conversation with Zoe Sharp and Julia Crouch. Professor Wilson asked Zoe and Julia to first read excerpts from their books – Julia from her most recent novel Tarnished, and Zoe from her new standalone novel The Blood Whisperer – and then invited the audience to say how the narrative had made them feel. It was fascinating stuff, and so interesting to hear the impact both the writers’ narrative had.

Professor Wilson was keen to learn what had prompted the authors to write crime thrillers and prompted Zoe Sharp speak of her real life experience of receiving death threats when working as a photo journalist. In a rather unconventional departure from the standard interview format he then turned a question to the audience – why do you read the crime genre? An overriding theme from the discussion was that readers enjoy the sense of justice and resolution in crime novels – something that you don’t always get in real life crimes.

So, by the end of these two sessions, I’d added five more books to my reading pile:

The Blood Whisperer by Zoe Sharp

The Guilty One by Lisa Ballantyne

Killing with Confidence by Matt Bendoris

The Necessary Death of Lewis Winter by Malcolm Mackey

I just hoped that there would be enough room in my case for all the books I wanted to buy, especially as there was still one more day to go …

[hop on over to www.bloodyscotland.com to check out the early bird offers for Bloody Scotland 2014]